For more than 35 years the Michigan Hydroplane Racing Association (MHRA) has brought its annual power boat races to Grass Lake to tally up points in the race for the association's annual driver of the year trophy. One of the many races sponsored by the association each year, the Grass Lake race, dubbed the "Wild Ones Regatta" has grown every year with new races, new drivers, expanded sanctioning, and boat racers from across the Midwest and Canada.

For its 25th year the MHRA continued a tradition, and a celebration of sorts, with the hosting of the 2009 National Stock Outboard Races, which were expected to bring more than 200 power boat racers from across the country to compete for that coveted 1US title. The first time the Nationals had been run in the Lower Peninsula of Michigan, it was a weeklong event in Grass Lake featuring various activities throughout the week highlighting the taste of Grass Lake and the outdoor sportsman's range of activities from golf, to fishing, boats, skeet shoots and so on, the community sought to spotlight Grass Lake as a continued site of excellence for the MHRA into the future as well as a perfect site for the Nationals, probably not every year, but for several years into the future.

Stock outboard racing emerged in the United States in 1924, and by 1948, stock outboard regattas were being staged under the sanctioning body of the American Power Boat Association (APBA). Because of its competitive nature, stock outboard racing grew considerably through the 1950's and came back to Grass Lake again as the site for the 2009 Nationals, providing for the biggest "Wild Ones Regatta" ever on Grass Lake. Starting with qualifying races on July 27, the event was staged across 6 days to the championship races on Saturday, August 1, with Sunday, August 2, held out as a possible rain-out make-up day. 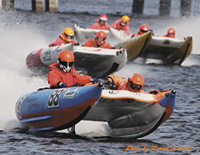 Along with the normal stock outboard races, this Nationals event included the Junior Nationals, for the youngest race drivers on the scene, along with the Superlight Tunnel (SLT) Boat Nationals, an up-and-coming category with an emphasis on FUN, says the APBA. Originally from South Africa, superlights are an inflatable boat with a powerful engine that puts two people in the race on a smooth course or rough seas, it's a special category to watch as the co-drivers steer the craft with wheel and weight to gain the upper edge. Superlights will compete in both the standard circle course races and the marathon races that get even crazier.

The "Wild Ones Regatta", an annual event in Grass Lake, began here in 1984 as Grass Lake's ideal conditions replaced an event in Ohio and continues strong through this year. Sanctioned by both the American Power Boat Association and the Canadian Boating Federation, the races on Grass Lake continue to grow in size and popularity with racers as the sanctioning increases participation. The proximity of Grass Lake County Park to the lake provides for an easy access to the lake from a wide expanse of shoreline and shallow water for the initial setup and start of the boats. 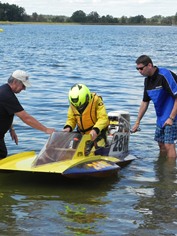 The Grass Lake community looks forward to 2021 when the Stock Outboard Nationals may again return to Grass Lake for the Sesquacential Celebration and a week of competitive racing. An effective use of one of our key resources, the stock outboard races has put Grass Lake on the national map....a place where many communities would like to be. For more information on stock outboard racing check the MHRA website at www.michiganhydroplane.com.